On today, we drive full day drive out to the Dalanzadgad town. Full day driving will be around 7-8hours. Stay overnight at Local Hotel. /Lunch& Dinner/

After having breakfast at the family, we will start driving to Yoliin Am, which is a deep narrow gorge in the Gurvan Saikhan Mountains of the Gobi Gurvan Saikhan National Park, covering 70 sq.kms. There is a small natural museum at the entrance of the National park which exhibits a collection of dinosaur eggs, bones, stuffed birds and snow leopard. This place is also very rich by the rare plants.

After we seeing the museum at the entrance we will drive about 10kms to get to the car parking where we leave our car there and walk a head to the ice gorge and stream for a several kms. In the winter time, the stream freezes several kms into the gorge. It remains frozen for most of the year, except late summer. We will see the ice gorge until end of the July. The ice remains usually disappear around early August.

On the way we get to the Yoliin Am we will stop for a lunch in a huge flat steppe. Once we wandering around the gorge, we will get back to our car and drive to the campsite we will stay there for tonight. (Breakfast, Lunch and Dinner)

After having breakfast, we will drive to the sand dunes called Khongoriin Els. The Khongoriin Els sand dunes lie north of the Baruunsaikhan Mountain in the northern part of the Sevrei and Zuulun Mountains. The Khongoriin Els is one of the largest and most spectacular sand dunes in Mongolia and they are up to 200m high, 12km wide and about 100km long. The largest dunes are at the northwest corner of the range. You can climb to the top of the sand dunes and then slide back down on the plastic bags. The views of the desert from the top are wonderful. Climbing to the top of the dunes during the sunset gives you an amazing panoramic view of the surrounding desert, to the north lies the Khongoriin River.

CLIMBING TO THE SAND DUNES

We can possibly arrange some optional camelback riding around the sand dunes before the lunch time. After having lunch at the family we will climb and hike to the top of the biggest sand dunes. We will stay overnight in a family ger tonight. (Breakfast, Lunch and Dinner) 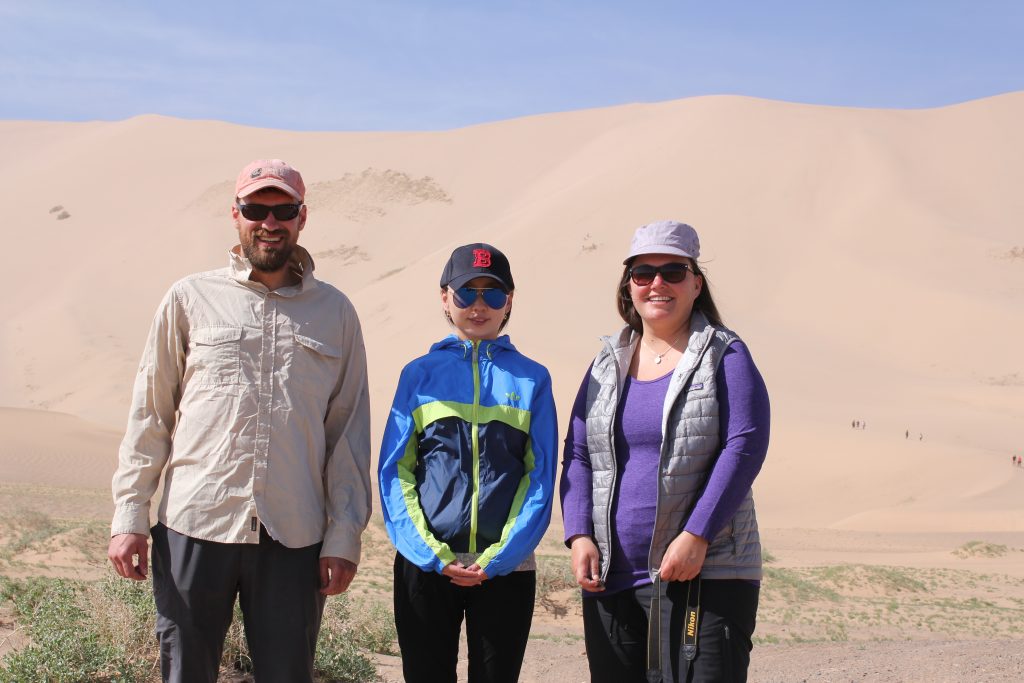 DRIVING TO THE BAYANZAG /FLAMING CLIFFS/

After having breakfast this morning, we will drive to the Bayanzag which is an important fossil finds have been made. It was given name by American paleontologist Roy Chapman who visited there in the 1920s. The area is the most famous place for finding the first discovery of dinosaur fossils. There is a picturesque saxaul forest the place is named after and colorful rocks which is brilliantly colorful. We will visit Mongolian family there and will staying overnight with their ger. (Breakfast, Lunch and Dinner)

After having breakfast in the family at the Bayanzag, we will head off to Saikhan Ovoo which is a small village in the Middle Gobi province. The bend in the river marks, the remains of two ruined monasteries, the Barlim Khiid on the north bank and the Khutagt Khiid on the south. The monastery used to have about 500 monks and built in the late 18th century for dedicating the first visit to Mongolia by a Dalai Lama. The monastery was reopened in 1990 and current Dalai Lama visited in 1. After we explore the ruins of the Ongi Monastery Ruin we will drive to the campsite for staying overnight tonight. (Breakfast, Lunch and Dinner)

Once we get there, we will accommodate in a town ger hostel. After having dinner in a hostel, we will have a free time hiking or wandering around the town. (Breakfast,Lunch and Dinner)

After having breakfast in the morning, we  will start driving to drive to the campsite we will stay there for tonight nearby. Accommodation: Tent or Traditional ger yurt  Meals: L, D

After having breakfast in the morning, we  will start driving to drive to the campsite we will stay there for tonight nearby Khovd province. Accommodation: Tent or Traditional ger yurt  Meals: L, D

After having breakfast, we will drive to the Ulgii.

Climate : It has a continental climate and high temperature difference between day and night because it is located at the Northern Hemisphere of the earth. The annual rainfall is 102.6mm. It is cold because of its high sea level altitude. The annual rainfall of Altai Nuruu surrounded with high mountains reached up to 400~500m. It is located at a desert region while it has also a variety in temperature and ecosystem. The annual average wind velocity is 4~9m/s. The temperature ranges from 32 degrees to 30 degrees below .

After setting up, we will drive to nearby Altai Mountains. Accommodation: Tent or Traditional ger yurt  Meals: BF, L, D

After breakfast, we will start to trekking to the Malchin peak, Altai mountains.

Stunning Altai Tavan Bogd National Park follows Western Mongolia’s border with China and Russia, and is the greatest attraction in Western Mongolia. The Park really does have it all: beautiful valleys, alpine lakes, rivers, glaciers, and the highest peaks in Mongolia. This natural richness gives rise to a host of activities; most visitors will do some hiking or horse riding, but there are fantastic opportunities for the better equipped or ogranised to try fishing, climbing, rafting, or back country skiing. To top it all off, travelers can experience the amazing Kazakh culture and see archeological sights such as petroglyphs and burial mounds. With all these attractions, you would think the place would be crawling with tourists. Fortunately, Altai Tavan Bogd Park is still blessedly peaceful and unvisited; even in peak tourist season, traveling the most popular areas, you’ll only see other tourists every few days or so. Get there before it all changes!

Tavan Bogd, or ‘Five Saints’, is so named for the five large peaks which lie right on the Western Mongolian border. The tallest of these, Khuiten Uul, is the highest mountain in Mongolia, at 4,369m (about 14,300 feet). It forms the Altai Mountains tri-border between Russia, China and Mongolia. From between these permanently snow-covered peaks tumble two spectacular glaciers. The valleys heading up toward the peaks are completely empty of people and absolutely stunning. Whether you do a day hike up or make a five day hike or horse trek up from the lakes below, you’ll find Visiting these peaks to be a highlight of Western Mongolia.

To visit the Altai Tavan Bogd National park peaks by vehicle, there is one access road which heads into the park east from Ulaanhus via Zagastruur. It’s a rough but very pretty drive up through the barren, rugged hills and nomad ger camps to reach the park. Also, the road from Ulaanhus contains some of the best petroglyphs (deer stones) in Mongolia, so keep a lookout as you’re driving past. If you dont’ have a (good!) guide, you may risk driving straight past them.(Breakfast, Lunch and Dinner)   Accmodations:Tents

DRIVING TO THE EAGLE HUNTER’S FAMILY

Visit local Eagle Hunter’s Family. Get to know the Eagle, learn how the Eagle Hunter trains the Eagle. We will spend some more time with the hunter and learn about the tradition of  hunting with eagles. At some point between mid- and late-September the fin feathers grow and the eagles become strong enough to hunt and carry larger prey. Having a photo with holding an eagle on your hand is fantastic memory. Camping nearby tonight.(Breakfast, Lunch and Dinner)

DRIVE BACK TO THE ULGII CITY

We will drive to and stay in the town of  Ulgii that night.(Breakfast, Lunch and Dinner)

After breakfast, we will transfer to the Airport at Ulgii town. Domestic flight will fly back to Ulaanbaatar. (Breakfast, Lunch and Dinner)

NOTE: Your car/driver and tour guide will be drive back to Ulaanbaatar start from morning of DAY16 and reach to Ulaanbaatar in the evening of  DAY17.